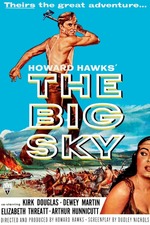 Before a screening last week, my friend asked me about some of the Cukors we had seen during the recent retro. She asked me my response to Sylvia Scarlett, which I responded as “a very appropriate choice for the Jonathan Rosenbaum Alt-100 List, for better and for worse.” The Big Sky also appears on that list, and it makes sense for Rosenbaum to champion this one over the film’s more canonical cousin, Red River. His reasoning is what you’d expect: “For a director as conservative and as habitually racist as Hawks, the warm and utopian three-way understandings generated between this unlikely threesome, especially when they spend some time together apart from the other characters, now seem not only multicultural but also downright countercultural.” I’d challenge Rosenbaum on some his details—certainly Hawks has his “problematic texts” (Fazil), but I’d say his interest in foreign characters (The Europeans of Hatari!, Dutchy in Only Angels, Carlos in Rio Bravo) is less cartoonish than playing to strengths that create dramatic and comedic tension (When Robin Wood asked him about accusations of racism, “He was indignant, but mostly he was visibly hurt. Then he gave to me what still seems to me, for its period, a good, intelligent (if arguable unenlightened) answer…'They were performers who came to my films with already developed personas. I helped and encouraged them to develop them further.’”).

Whatever the case, Rosenbaum sets up somewhat a straw argument in his own articulation of The Big Sky, but that is to say the film is not without its very unique pleasures: a slowly paced “Northern” more than Western of men forming a community in what is literally “unknown territory.” The stakes seem relatively low, even for a Hawks movie, though the dynamics of the community provide a place where various race and gender questions are dispelled, though like many Hawks films, it is the antagonistic friendship that centers the film. The film has its great sequences: the drunk song before the journey, the often discussed amputation scene, the big shootout along the river, and perhaps an image that rivals Man’s Favorite Sport?’s bear on a bicycle for pure absurdist pleasure, the flinging of a deer in the sky. But something about the central friendship never seems totally together; Red River must inevitably lead to Clift and Wayne staring each other down, and here Hawks even has a woman between the men, but you never feel the tension I think necessary because there are so many other plots (the evil capitalist, the Frenchmen wariness, the various Native American tribes) that make the film feel unfocused. Hawks agrees the ending, which is supposed to be more tragic, doesn’t really translate (To Bogdonavich: “When [Douglas] attempts to be too pleasant or show friendship, it doesn’t come off”). Wood argues the problem with Sky is that Hawks forces the various plots together, which “suggests the lack of organic relationship,” and I attend to agree with that assessment.. Then again, there are many rhythms of daily life, so much that you could praise this film for “realism,” so perhaps it will grow on me.