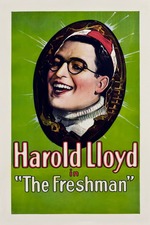 “Lloyd was outstanding even among the master craftsmen at setting up a gag clearly, culminating and getting out of it deftly, and linking it smoothly to the next. Harsh experience also taught him a deep and fundamental rule: never try to get “above” the audience.”
-James Agee, Comedy’s Greatest Era

Chaplin is a saint, Keaton a bit of a devil (at least according to the laws of physics). Lloyd is us. In The Freshman especially, all he is trying to do is fit in. Lloyd’s plots are broken up into sequences in the same way as Chaplin – you could mix and match scenes pretty easily without too much interruption of rhythm or flow – but within the scenes, he works closer to Keaton. Each scene is built on the continuous gag. The party sequence is the apotheosis of this structure: it’s all built around the fact that Lloyd’s pants are going to come off, and then structured through various gags that will exploit that, using each solution as the setup for the next moment. The difference between this and Keaton, I would argue, is that all of Lloyd’s gags take place in a sense of the real world here. “Chaplin and Keaton lived poetically in worlds of their own creation,” explains Dave Kehr, “while Lloyd lived, thrillingly but unmistakably, in a world the audience recognized as its own.” Keaton’s maxim is that the best solution to any problem is the one that makes the most logical sense (though hardly a practical one). Lloyd simply decides to forgo obvious solutions because of his emotional register (he ignores the fact he is breaking bones during football practice because he is “on the team;” the pants can’t wait because he’s already late). Lloyd is the most human of the silent clowns, and the use of close-ups in which you see his two second internal debate before doing something, shows why he has always graced an interesting but still very niche part of silent cinema.