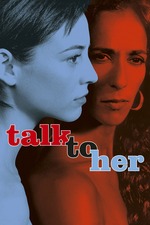 What a hell of a film. Unexplainable. Absolutely beautiful. It is its own creation; own masterpiece.

It touches on mental issues. The attention we give to these people, no matter how messed up it may be. It's confusing.

It starts with a dance. Ballet. 2 women blindly dancing in a floor of chairs, being moved by a sad man. This is where we see our 2 male protagonists. Watching. Marco crying. This sets up the rest of the film. 2 women trapped, no voice or eyes. In a coma. Just being watched by men. Obstacles being removed. Marco, cries of empathy. Benigno is plain. In wonder by what Marco feels. Our 2 protagonists.

It explores masculinity. What is considered masculine and feminine. They assume Benigno to be gay. He's a male nurse. He comes together with Marco and forms a bond. Things that are considered feminine. Ballet. Katerina talks of soldiers and their souls coming from their bodies, ballerinas, tutu's, but stained in blood. Katerina says behind every man is femininity, but I think she got it wrong. The story tells us that behind everyone is vulnerability. A soft spot.

We look in discust at these characters obsessions, however, we also support them to an extent. Almovedar trends lightly. Perfectly.

This film is wacko. Nuts. A fever dream in real life. Believable yet not. Roger Ebert gives a much better review.