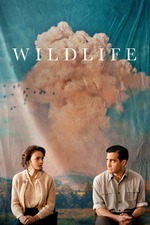 wildlife is not your typical unhappy family drama. it is a compelling and sensitive piece that gave proper attention to its characters. wildlife earns its dramatic weight from the three fully inhabited performances by carey mulligan, jake gyllenhaal, and ed oxenbould.

a lesser screen adaptation of the novel would have included joe speaking in voice-over. but paul dano, in his directorial debut, lets the camera follow the disintegration of jeanette and jerry's marriage through joe's eyes. joe became the audience's eyes and ears, our guide.

carey mulligan's performance as a frustrated woman snatching back her identity is very notable. I must say carey delivered one of 2018's best performances. although with lesser screentime compared to carey, jake gyllenhaal, as expected didnt disappoint. ed oxenbould on the otherhand has flaunted raw talent.

wildlife also boasts an evocative imagery rendered in elegant, studied visuals. paul dano composed this film beautifully. the use of desaturated colors and plain, portrait-like framing throughout is something to love. landscape and music and mundane objects have also been used to a splendid effect.

although more bittersweet than conclusive, I love how dano ended the film: with a family portrait. "you see, people like to come in here to remember something good in their lives. they wanna make that happy moment permanent. keep it forever."