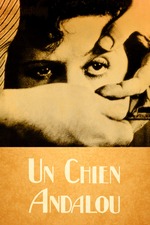 People complain there is no dog to be seen in An Andalusian Dog. They are right. The dog is not seen, but it is there and represented in the most ingenious way. Bunuel uses the iconic 'eye-cutting' scene as the catalyst to set events in motion and as the framework to string together the disjointed images into a still more blurred whole. Bear with me on the following montage of stills I've taken from the movie and you'll see how and why.

2. The Cycle
The eye's luminescent glow is blotted out by the gray tendrils of the clouds. The blade draws nearer; the eye is cut in half with the razor, and the soul splits: the cycle is set in motion. One personality becomes two, one human being two, eternally bound together and separated from each other in a perpetual cycle of love and torment.

3. The Dog
Eternally bound together and separated from each other in a perpetual cycle of love and torment. The cycle is revived every 8 years: pain and joy, hate and love, death and life; like the recurring stripes on a locked box with no key. The key is found; the box is opened. Pieces of striped clothing are thrown out: jeans, shirts, jackets, but mostly ties. The knots of the ties are unbound; they are free for the moment, free to tie themselves around the neck of the next wearer. Free to strangle them in their unwavering loyalty for the next 8 years. Loyal to the end. Like the dog.

4. The Striped Box
Loyal to the end. Like the dog. The cycle nears its end. There is a peaceful beach where the waves murmur and lap on the shore and the clear sky hums a thousand possibilities for the years to come. The striped box is found farther off from the waves, among the bare rocks. It is broken.

5. Spring
It is broken. The cold ribbons of winter are washed away; spring blooms into life as the cycle is renewed. The silhouettes of two human shapes are seen lodged in the landscape, motionless, their bodies jutting out of the sand, their faces strangely distorted. The blossoming notes of spring are carried away to a different place, a different cycle. The eye follows their path, wondering if the next window will be open.