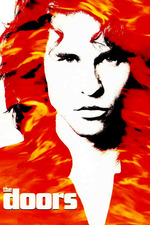 This one’s tough to rate because you’ve got a 5 star performance wedged into a 3 star movie. Messy in the sense that the things that seemed extraneous (annoying witch journalist, funny if not too long Thanksgiving scene) could have been replaced with scenes that demonstrated the more creative / spiritual side of Jim rather than just showcasing the horny, acid-fueled, wild man that he was. Also Meg Ryan is not good in this. I would have rather had to put up with the Nicole Kidman accent and had her in this instead of Meg Ryan. Sally Albright in a red wig. Actually all the wigs except Val Kilmer’s are bad. Anyway, all things aside, have never seen a biopic with a more convincing performance. This doesn’t feel like Val Kilmer doing Jim Morrison. Genuinely feels like watching found footage. The mannerisms, the SINGING. Can’t imagine anyone else coming close to doing this justice. The hottest Val Kilmer has ever looked. Unfortunately also the ugliest Kyle MacLachlan has ever looked but that’s ok, you can’t win ‘em all, king.