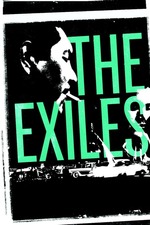 Minimalist black-and-white gem about a group of young Native American men and women during one night in Los Angeles.  Captures Beat Generation vibe of the time, and that is the filter we see the group in until we are shown how much of their tradition has been preserved.  The contrast between the modern cityscape with traditional ideals reminded me of Lonely are the Brave, which would be released the following year.
The film is beautifully shot and edited, making more than the most of its budget, much the way Little Fugitive did 8 years prior.  The immediacy of the writing and acting and overall energy of the film reminded me of Shadows, released two years earlier.  Much like Cassavetes’ debut, the acting and writing in this came across so naturally that it almost seemed improvised.
I wouldn’t be surprised if this had an influence on Scorsese, who would release his debut Who’s That Knocking on My Door six years later.  Also very likely to have influenced newer crop of minimalist indie filmmakers of the next generation, Jim Jarmusch (Down By Law, and Strangers in Paradise, specifically ) and Wayne Wang (Chan is Missing, especially given his celebration of his own culture viewed through beatnik American lens).
The only drawbacks are a pretty poor dubbing job, and some of the scenes drag a bit,  making it feel longer than its hour and 12 min. running time.