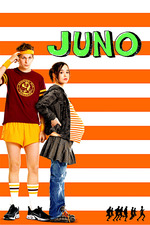 Re-visiting this as an adult was truly a gift. I was about 18 when this came out; already a self-described Film Buff, but still with a categorically teenage point of view. For that reason, this film annoyed the SHIT out of me in 2007. I was so bothered by the wildly unrealistic dialogue, that I totally wrote the film off as trash.

Watching it now, at age 32, I'm still annoyed by that scene with Rainn Wilson...but I can thankfully see the forest for the trees. I can appreciate just how inappropriate her relationship with Mark was (I could have literally strangled him myself), but could also understand how a mature 16 year old could have gotten into that situation. And more importantly, I can see all the beautiful love stories within it: Juno and her dad, and, in a lovely twist on film tropes, Juno and her stepmom. Most beautifully, though, the one between Juno and Vanessa. The scenes between the two of them are so tender and sweet. I only clocked it this viewing, but Vanessa puts Juno's note on her baby's wall, in the spot she had designated previously as being for "our first family photo". It's so wild and special to be able to see a film anew like this.