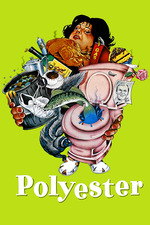 Polyester marks a huge turning point for John Waters & the Dreamlanders. Years of pushing boundaries with the filth of their previous films finally paid off, earning them a respectable budget with a push towards mainstream success. Waters aimed to "infect a larger audience" with his first R-rated film, & he did just that.

A hilarious farce from start to finish. It's a satire that takes the piss out of every trope in a melodrama with one ridiculous situation after another. Alcoholism, infidelity, teen pregnancy, a foot stomper(?) - this movie has it all. Divine finally gets to live out his dream of being Elizabeth Taylor in playing Francine Fishpaw. Edith Massey is as charming as ever. Not enough Mink Stole for my liking, but the rest of the ensemble cast more than made up for it.

The Odorama™ gimmick that is featured in the film was sickening. As someone who occasionally deals with septum cheese, I loved/hated every gross sniff of it. Farts, dirty shoes, cheese, & a skunk are a few of the odors featured - so I appreciate Waters having the last smell be an air freshener.. A clever way to keep an audience engaged with a Dreamlander twist!
---
Hope everyone has a not so smelly weekend - thanks for reading!✌