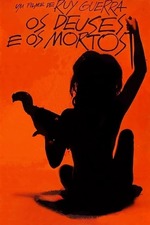 Of Gods and the Undead

Lencho of the Apes’s review published on Letterboxd:

1910 Brazil: global finance manipulates chocolate prices, destroying the lives of plantation owners and triggering range wars that destroy the lives of peons. Two of those are uber-traumatized; the guy externalizes his trauma and becomes a Demon Of Vengeance (tm) and the woman internalizes it and turns into a nihilist Kali-Yuga Womb Of Death (patent pending.)

It's a novel by Romulo Gallegos (the Dona Barbara guy...) adapted for the screen by Antonin Artaud. The end.

Lencho of liked these reviews

Lencho of is using Letterboxd to share film reviews and lists with friends. Join here.

Why Has Bodhi-Dharma Left for the East?