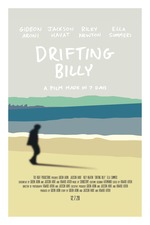 This is coming from a friend who highly respects these fellas regardless of what content they make. And Massive props to gids, howie and jacko making this in one week. Getting the motivation to do something like that takes guts. We need guts so huge love to that.

Drifting Billy however felt like an overly long and unengaging vlog. Im all for heavy dialogue in films, but this fell incredibly flat and it meandered for way too long. I think there needs to be a stronger understanding to why great films with heavy dialogue work and why others fail. I found no sense of agency, interest or revelation within the characters’ dialogue. The improvised method of filming dialogue is a smart and efficient  way to pump a feature out in a week, but if you wanna hone in the idea that the film is supposed to be aimless with no attention to any elements of the cinematic
language, dont expect me to care or be interested at all. Because of that improv attitude, it therefor just feels like a really obvious documentary on Gideon himself and not the character of Billy.

The sound was surprisingly great which is a huge deal for a small film like this. The camerawork and editing however did not do anything for me to help get through the dialogue. It did just feel like a vlog set up where we just follow the character without any relation to perspective or motivation. And even though the boys can now hold the flag of making a feature, this honestly could of been just 10-20 mins. The first 20 mins alone was incredibly boring and uninteresting. I felt that it needed to only show dialogue relevant only
to the character of billy and not the actor of gideon.

I know you boys are talented and i want you to get better in your craft, but i think its important to fully understand your limits (hence your week deadline) and really find a story that can hold an audiences attention. Its totally possible and duable and i can guarentee you will get there. Considering you put this up on youtube for free, i’m of course not going trying to judge this on the same level as other low budge films that actually make u pay. But this is still on letterbox’d and you’ve been marketing it as a feautre so i hope i judged it fairly as that.

Keep it up boys!