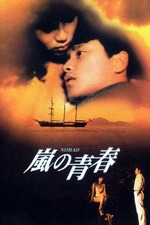 An astoundingly, jarringly protean film: The opening sequence—the camera panning away from a seaside view to a woman playing the piano, with a sliding glass door bisecting the frame; then a Tsai-like cut to inside a room with Leslie Cheung, the two shots linked by the piano—hardly prepares one for the comic hijinks that follow, with Pong (Tong) and Louis (Cheung) swept up by an energetic group of women. Bus-stop flirtation (and on-board consummation) anticipates Wong (specifically As Tears Go By, though there's no small amount of Days of Being Wild), and is emblematic of the sexual energy that courses through this, which only makes the political undercurrent more potent when it does rise to the surface. Still couldn't quite reconcile all its disparate elements—especially the abrupt finale—but until a second viewing, it's probably enough to note that the first montage at Lantau Island (preceded by the wonderful top-down shot of Kathy and the Japanese Red Army deserter languishing on board the Nomad) rivals the rapture induced by, say, the last ten-or-so minutes of L'Eclisse and the closing passage of Syndromes and a Century. And that's even before a later camera movement that tracks the four bringing lanterns into a darkened house, lighting it up as if creating a world anew, followed by a circling movement around the dinner table, and then a survey of their sleeping figures entwined in a kind of (pan)sexual bliss.