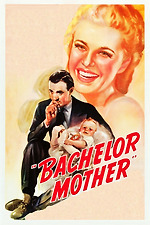 (Trying to impress a skeptical couple that her 7-month-old baby can talk)
Polly: “Doesn’t he talk dear? Didn’t he talk last night?”
David: “Certainly he talks! And very well too. He can recite the first line from Gunga Din.”

This film is cuteness overload!! Ginger Rogers, David Niven and an extremely adorable baby make a hilarious and charming trio. They all have top-notch chemistry, making it a disarming portrayal of first-time parenthood. Much of the hilarity stems from the fact that they aren’t the real parents of the baby, and they aren’t even a couple together! Polly suffers a case of mistaken identity, causing her to suddenly become the mother to this baby. Polly’s employer, David, starts to develop a fatherly instinct and slowly starts to fall in love with Polly. I couldn’t stop laughing when David tries to figure out how to feed the baby 🤣 It literally reminds me of fathers with their newborn babies at the hospital where I work as a student nurse. They care so much, but they have no idea what they are doing a lot of the time 😂 Such a charming and hilarious film!! Definitely one of my favorites now! Thank you so much @Alyssa for recommending it!