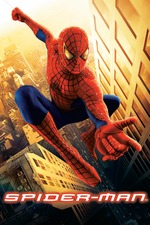 2002 was a strange and confused time. The internet was well on its way to becoming what William Gibson warned us about, Enron and WorldCom were continuing to show everyone the glorious beauty of capitalism, Nickelback's reign of terror began to take hold, America was only fighting one misguided unwinnable war in the Middle East, we didn't know that James Franco was actually annoying as hell, and comic book movies weren't remotely taken seriously. Spider-Man was one of the first volleys into changing that last one.

You have to wait for Spider-Man 3 to find out about James Franco.

I know I don't have to summarize this because in 2016 we have seen somewhere between three and nineteen different versions of Spider-Man that have retold his origin almost exactly the same. You would have to live under the Thing to not know Spider-Man's origin story. If you texted your grandma right now and asked her about Spider-Man she would say "that is the high school kid that gets bit by the radioactive spider right" and then ask why you never come visit.

Spider-Man is the first big screen adaptation of the series as well as an arguable early starting point for the superhero movie genre's evolution to guaranteed box office behemoth. It is a capable movie that was helped along by the directorial skills of Sam Raimi but it falters in a number of high profile ways.

While a lot of people set their sights on Tobey Maguire when they start docking points off of their enjoyment of Spider-Man, I actually found him to be solid enough in the role. Obviously, there are some big moments where you realize just how shaky he is as an actor, but considering he is playing Peter Parker it isn't the biggest deal. I think people tend to forget that Peter Parker is kind of an annoying dork in the comics. Tobey Maguire makes a good annoying dork so he isn't the problem.

No, the problem is Kirsten Dunst. It seems like if Kirsten Dunst is in something the problem is always Kirsten Dunst. Like Peter Parker, Mary Jane Watson has her faults as a character as well, but Kirsten Dunst is such a lifeless and uneven actor that the movie would have been better if she was left entirely out of it. Combine Dunst's baseline awfulness with a script that turns makes her indistinguishable from the generic movie damsel and you have a Mary Jane that is among the worst and most inconsequential interpretations of the character in any medium. And that is including the one that died from Spider-Man's radioactive sperm.

My tolerance of Tobey Maguire and my hatred of Kirsten Dunst aside, the real star of this movie is Willem Dafoe. Man, what a perfect bit of casting that was. They should have scrapped Spider-Man 3 and just made a movie where Dafoe's Norman Osbourne goes around yelling at everything. Or maybe a buddy movie where Dafoe and the equally awesome J.K. Simmons have to go on a road trip while publishing a weird Spider-Man zine or something. It would be like Falling Down except with more yelling about Spider-Man and less uncomfortable resonance for shitty white aggrieved baby boomer dudes.

This is Spider-Man though, and this is 2002, so I've already wasted too much time caring about the acting and casting and script. None of that mattered to comic book films yet. What really matters is how fun the punching is. The punching is fun. The story is where things get iffy. Spider-Man's narrative is slotted into a very basic template for origin story movies, and this is where the uneven nature of these "transitional" superhero movies becomes clear. We weren't yet bored of the formula yet so it doesn't get unbearable or anything, but Spider-Man really does constantly score a point and then have a point removed. Example; Peter Parker putting his pajamas on to fight Macho Man is a +1. Peter Parker suddenly having an impossibly well crafted suit without any explanation is -1. Cool big budget fight scene between iconic characters is +1. Corny hamfisted post 9/11 New York pride scene forced directly after it is -1. This continues for the entire movie. The parts where Sam Raimi gets to strech his legs and add some camp are great. The parts where Sony wants to make a movie that moves product to Middle America are not.

I remember enjoying this first Spider-Man, but newly teenage me was still staunchly in my baby-nihilist "no super hero movies will ever be good stage" at this point so I only really gave this a shot then because of Sam Raimi. It is interesting to go back almost a decade and a half later and see what the first volley in the Actually Trying to Make a Good Comic Book Movie Because Seriously Why Is It So Fucking Hard You Idiots movement looks like in comparison to the constant hum of watchable big action blockbusters. It obviously doesn't hold a candle to the first Iron Man or Captain America 2, but after watching this again I'm fully confident that those movies wouldn't exist the way they do if it weren't for Sam Raimi's Spider-Man.

WATCH if you are under the age of 20 and want to see the kind of things that gave us old men hope for this genre. DON'T WATCH if you still haven't gotten those pictures of Spider-Man yet! Go get me Spider-Man!