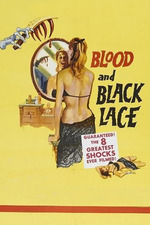 Vancouver Intl. Film Centre had an Italian Film Festival that featured three giallos this year. Had the pleasure of revisiting this one (first time on the big screen) thanks to them.

So this one is a landmark film because it (along with Bava's earlier film The Girl Who Knew Too Much) began the giallo genre. But B&BL is in color and color has so much to do with the genre that this is the film that signifies the beginning in most people's eyes.

Arrow Films released the restoration on Blu-ray in 2016.
I love these trailers that Arrow Video puts out for their releases:
www.youtube.com/watch?v=4DGl5PSIPvw

After seeing this film again, I think I want to dive in to the extras that Arrow Films has on the Blu-ray.

- Brand new 2K restoration of the film from the original camera negative
- High Definition Blu-ray (1080p) and Standard Definition DVD presentations
- Newly translated subtitles for the Italian audio
- Optional English subtitles for the deaf and hard of hearing for the English soundtrack
- Brand new audio commentary by Mario Bava’s biographer Tim Lucas
- Psycho Analysis – a new documentary on Blood and Black Lace and the origins of the giallo genre featuring interviews with directors Dario Argento (Suspiria) and Lamberto Bava (Demons), screenwriter Ernesto Gastaldi (All the Colors of the Dark) critics Roberto Curti and Steve Della Casa, and crime novelist Carlo Lucarelli, and others
- An appreciation by Hélène Cattet & Bruno Forzani, the creative duo behind Amer and The Strange Color of Your Body’s Tears
- Yellow – the much-acclaimed neo-giallo by Ryan Haysom & Jon Britt [Blu-ray exclusive]
- Gender and Giallo – a visual essay by Michael Mackenzie exploring the giallo’s relationship with the social upheavals of the 1960s and 70s
- Panel discussion on Mario Bava featuring Dario Argento, Lamberto Bava and Steve Della Casa, recorded at the 2014 Courmayeur Film Festival
- The Sinister Image: Cameron Mitchell – an episode of David Del Valle’s television series, devoted to the star of Blood and Black Lace and presented in full
- The alternative US opening titles, sourced from Joe Dante’s private print and scanned in 2K especially for this release
- Original theatrical trailer
- Collector’s booklet featuring new writing on the film by Howard Hughes, author of Cinema Italiano and Mario Bava: Destination Terror, an interview with Joe Dante, David Del Valle on Cameron Mitchell and more, all illustrated with archive stills and posters