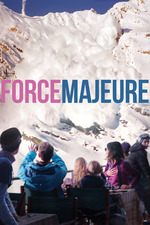 I mean, what exactly is a "hero"? What makes a real "man"? If a man reveals himself to be a coward and weak, would that make him less of a man?

The film is about a normal Swedish family vacationing in the French Alps. Then one day, they become caught up in a "controlled" avalanche. The husband’s selfish reaction to the danger posed by the unexpected disaster causes marital tension and stress in his relationship with his family, especially with his wife.

I love the irony presented in this: a "force of nature" disaster causes a real marital disaster. Force Majuere shows the bleakness of a normal marriage tested under extreme circumstances. I don't know about you but this is definitely not the kind of film to watch with your loved ones.

The pivotal event at the film's beginning affects our characters' marriage in disastrous and ugly ways. Ebba, the wife, was beyond shocked on her husband's selfish actions during the disaster. She's thinking "can I love a husband who would leave me, and our children, to die alone?". However, as the film goes on, the wife's biggest problem isn't really about her husband's cowardice, it's about him denying the actual experience and lying about his controversial actions during this. The wife felt betrayed and disappointed because he's not admitting his faults. Let me tell you something, being a "man" isn't really about being brave and heroic. It's about having the guts to admit our own faults and weaknesses.

Ruben Östlund smartly inspects his characters in fair ways in order for us to draw our own conclusions on them. As a slow-burn melodrama, Force Majuere is very captivating to watch because it's funny, sad, uncomfortable, thought-provoking, and awkwardly tense all at the same time. Moreover, the film comments on traditional views of what men, women, and parents should be like and what is expected of them. It doesn't offer any easy answers but instead let you decide on your own.