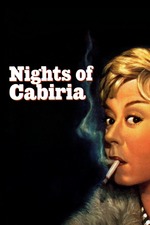 Part of the 30 countries festival. Italy

I want to capture my immediate reaction to this, my first Fellini film. I am far too emotional right now to settle down and reflect or read other reviews - I just want to write.

And I was giddy. At the 40 minute mark I took a break and I was all smiles, ear to ear, practically bouncing up the stairs and I couldn't wait to get back to that Play button.

My first Fellini. What in the hell was I so afraid of? Nights of Cabiria is, right at this moment, for today, my favourite film. I fell in love with Maria 'Cabiria' Ceccarelli, I fell in love with her energy, her gruffness, her amazement, her curiosity, the way she left the heart on her sleeve well covered by her short fur coat.

I rooted for her throughout no matter what circumstance she was in. I felt her heartbreak even when she would barely let me see it. I admired her resilience and I loved her determination to ever-so-slowly push her heart back onto her sleeve when it took a nosedive.
Because I love Cabiria so much I love Fellini as well for taking care of her and telling her story.

Nights of Cabiria is like hundreds of films out there about the tough woman on the wrong side of the tracks who has a heart of gold. It is like some of those films where the woman wants to be loved. But it is like none of them in the way it displays her spirituality, her sense of longing to be good and worthy, not to get a man or a husband, but just to be good and worthy (and of course it bothers me that I have to make that distinction). This is what I loved most about this film. I don't know the word for 'the furthest thing from trite' but this is it. Cabiria also made me realize why I was never swept away by Audrey Hepburn. I like her well enough but I realize now that her characters never have depth. Cabiria is similar in some ways to that character Hepburn keeps playing, but Cabiria is real, flesh and bone, not just batty eyes and million dollar smiles. If anyone loves Hepburn because of her eyes, they have to see Giulietta Masina.

All I want to do now is watch more Fellini. I have this idea that his films are quite diverse and that finding another film like this may very well be a lost cause. But if he can tell stories with as much depth as this one, then I'll love them all. Heck, I'm even willing to watch the ones that include circus scenes, and that's saying a lot.

I'm so gob smacked at the moment that I'm not even sure if what I wrote is cohesive. All I know is that I've never wanted to capture my reaction to a film as badly as I wanted to capture this one. It's all heart. I love movies that make me think, they tend to be my favourites, but I've never fallen so in love with a film that just made me feel.

And it's all because of Giuliette Masina's unbelievable performance as Maria 'Cabiria' Ceccarelli, and of course, Mr. Fellini, whom I was so afraid of befriending.