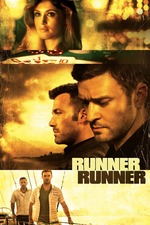 What dreadfully uninspired drivel this is. I had read bad things about this crime thriller but I was still surprised by how poor it actually was, particularly as I rather enjoyed Brad Furman’s last film - The Lincoln Lawyer. Unfortunately, Furman struggles to bring the same brisk and breezy energy to this caper about a cocky git getting a reality check down in sunny Costa Rica.

Justin Timberlake stars as a Princeton student who is hustled out of his tuition money on an online poker game. Taking the unusual choice to travel to Costa Rica to challenge Ivan Block (Ben Affleck), the owner of the gambling site, he soon finds himself in a world he is ill-prepared for as he is forced to help in an FBI investigation to bring down Block and his whole corrupt organisation.

There was potential here for a fun, if rather forgettable, crime story set in the hedonistic tropics. Unfortunately, its location is the only vaguely interesting thing about this derivative and soporific bore. There is just nothing of note here from the bland performances (Timberlake is terrible as a lead whilst Affleck is predictably weak as his rich adversary) to an undeveloped romantic subplot that possesses zero sexual chemistry (which is all the more surprising when it involves Gemma Arterton).

The film suffers from being both ponderous and underwritten as it fails to flesh out the characters or world of online gambling. Even when the FBI are involved the stakes never feel particularly high whilst its climax is a real stinker. If it wasn’t for its cast this is the sort of duff material that would have had a direct-to-video release back in the ‘90s and starred Luke Perry in the lead role.

Runner Runner is a complete dud.