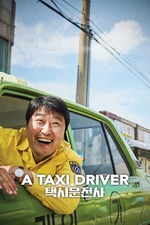 A Taxi Driver is about a Seoul taxi driver that becomes involved with the Guangju uprisings when he decides to accept a fare from a German reporter, and is tasked to drive him to the area of conflict. Along the way, the taxi driver sees first hand, the atrocities that the South Korean military is committing and becomes an unwilling participant (at first) to expose the truth to the rest of the country and the world.

This is based on the Guangju Uprising during the military dictatorship in South Korea that happened from May 18th to the 27th of 1980. The film uses actual event and real life people, Kim Man-seob and Jürgen Hinzpeter, as the basis, to create a fictionalized account that occurred during that time. This is not a biopic as many changes were made to create this powerful, expose of this dark chapter in South Korea's history. The only similarities between the real life Kim Man-seob and Jürgen Hinzpeter and their counterparts in the film were that Kim was a taxi driver and Hinzpeter was a reporter.

This fictionalized account doesn't take away from the fact that the government and military actions resulted in the injuries and deaths of civilians lives. It's crazy that the exact number of deaths have yet to be acknowledged by the South Korean government as although the official record list the number of casualties as 144 civilians/rioters and 26 military/cops, it has been argued that the actual number of casualties range from 1,000 to 2,000 range based on foreign press sources and government critics. The account of the uprising is still a point of contention for the South Korean government as the actor, Song Kang-ho, with his fame and stature was threatened to be blacklisted for his participation in this film and declared communist sympathizer by the government.

Watched via Prime Video Canada in Korean with English subtitles.