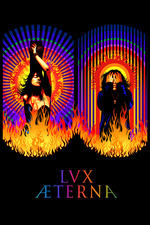 I feel like we, the audience, fans who have waited months for this project, we are the real witches being burned on the YSL adorned stake, but we are enjoying the hell out of it.

Gaspar Noe at his most self indulgent yet most self critical. He seems to have taken the common criticisms of his idiosyncrasies- incoherent plots, non traditional  narrative structures, rambling dialogue, hard to follow camerawork, his often misunderstood use of female characters, and most of all how insanely seizure inducing his movies are, and crank them up  past 11, all the way to 13 or 14. Seriously this film makes the iconic Enter The Void Intro look like a mildly intriguing power point presentation with its sheer force of color. My eyes literally hurt after watching this movie, and I was seeing color sport for a not insignificant amount of time afterwards. I do see why people hate Noe, but personally I love his body of work, however some of his criticisms are valid. With Lux Aeterna it’s like Gaspar Noe created a critics strawman of a Gaspar Noe film. Some of its absolute insanity is endearing at points, and there is much to think about but it really does feel at least in part like you are watching someone who hates Gaspar Noe’s description of a Gaspar Noe film. The whole YSL advertisement thing fits in here really strangely. I believe his intent was to kind of parody himself while also trying to make a movie that works as a generic part of his catalogue. I can’t say whether he exactly succeeded or not after just one watch, but it certainly was a worthwhile experience.