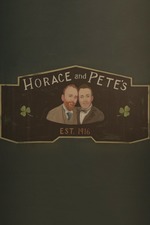 Horace and Pete. A show about the inherited trauma of successive generations of families inflicted by a domino chain of terrible fathers. An understated tragedy which uses the power of story over any elaborate techniques. A real bare bones piece which speaks to the essence of familial misery.

It's something quite special, with a level of storytelling and dialogue which you would expect from a Bergman movie, not a sitcom written by a stand up comic. There are many stand out moments in this respect, none moreso than that of the bizarre monologue in which Horace's ex-wife recounts how she forged a sexual relationship with her husband's father. I mention Bergman above because that story reminded me heavily of Persona's famous "one time at a the beach" story.

Anyhow, there are a few things which put Horace and Pete a few yards short of perfect, such as some rather on-the-nose political musings, and a rather heavy handed use of mental illness as a plot device. Despite this, Horace and Pete is an incredibly refreshing experience and a fantasic story which uses sheer narrative power as its driving force. Head and shoulders above any other miniseries I've seen in the last few years.

It's a Wonderful Life