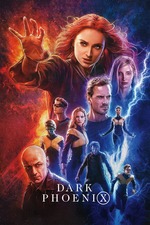 Dark Phoenix is the 12th and final instalment in the X-Men franchise, which began at the start of the millennium. Not only this, but this is also the directorial debut of Simon Kinberg.

In the middle of a dangerous rescue task in space, Jean (Sophie Turner) is struck by a cosmic force that changes her into one of the most commanding mutants of all.

Struggling with this progressively unbalanced power as well as her individual personal geniuses, Jean coils out of control, ripping the X-Men family apart and intimidating to damage the very material of Earth.

However, it’s a shame, because the characters on occasions don’t know what to do with themselves, which make it irritating for the viewer.

Elsewhere, Jessica Chastian offers little in her part as Vuk, the person in charge of a changing alien race known as the D’Bari who operates the Phoenix and it isn’t the only problems the movie has.

The direction from Kinberg is not good as he creates no tense atmosphere happening whatsoever, while the script is written to a poor standard by the director as, at times, there is absolutely no focus on the story at all.

Not only this, but the action sequences don’t get the edge-of-the-seat status when they really should, while the visual effects don’t dazzle when they appear on the screen.

Also, I am not surprised to find out that this was a flop at the box office. I do hope Simon Kinberg's next film as director will be much better than this.