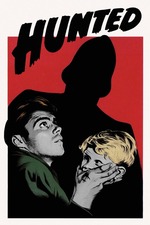 Charles Crichton directs this British drama in which a man fears a boy has witnessed him commit a murder and together they go on the run.

The story concerns An unusual relationship which develops between a killer on the run and a runaway orphan on an odyssey across England.

Jon Whiteley is excellent in his role as Robbie, the six-year-old boy who witnesses a man murder his wife’s employer. That man happens to be Chris Lloyd (Dirk Bogarde). Realising that Robbie is the only witness to what he has done, Chris has been left with absolutely no option but to take the boy with him, go on the run and not get caught.

Jon Whiteley suits his role really well as the young boy who knows that Chris has a dark side towards him, while Dirk Bogarde is very good in his role as Chris Lloyd, the man who goes out of London on his way to Scotland with Robbie. Both of those actors do not disappoint for a single second they are on the screen for.

Elsewhere, Elizabeth Sellars is good in her role as Chris’s wife Magda Lloyd, while there are good supporting performances to be had from Frederick Paper and Kay Walsh in their respective roles as Mr and Mrs Sykes.

Geoffrey Keen and Douglas Blackwell are the two detectives trying to figure out where Chris and Robbie have gone to, while Leonard White is the police sergeant trying to catch Chris so disaster doesn’t strike again.

The direction from Crichton is very good because he allows the facial expressions to be seen to a strong effect throughout, while the script is written to a decent standard by Jack Wittingham and Michael McCarthy as they make the film easy to follow.

The technical aspects that stand out best are the set and camera, because the set is decent to look at, while the camera makes good use of the locations the movie uses.

This film can be described as a rare example of the buddy film genre, because of the unusual bond that is developed between Chris and Robbie.

Overall, Hunted is one excellent drama from Charles Crichton, mainly thanks to the excellent performances from Dirk Bogarde and John Whiteley.