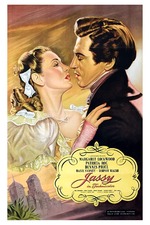 There are two things which are notable about this melodrama. It was the only one from Gainsborough to be made in technicolour, and it was also the last ‘official’ melodrama as well.

The story is set in 19th-century England and sees Margaret Lockwood play the role of the title character Jassy, a young Gypsy girl who has been sanctified with the present of second sight (future events before they happen).

Followed by irrational villagers, she is saved by the son named Barney Hatton (Dermot Walsh) of the landlord of Mordelaine, a massive grand home. Sadly, Barney’s father Christopher Hatton (Dennis Price) has big drinking and gambling problems, which threaten to destroy the ownership of the house.

Despite being hired as a servant around the house, Jassy must use her skills in order to go up the social ladder and rescue the man who she has fallen in love with.

Margaret Lockwood gives a decent performance in her role as the title character and she suits the role well, acting like she is determined to save the house from not having a owner.

Dermot Walsh and Patricia Roc both give good performances as the son-and-daughter Barney and Dilys, who both form a bond with Jassy, while Dennis Price is fine in his role as Christopher, the man who needs help with his problems he is experiencing.

The direction from Knowles is good because he allows strong facial expressions to be seen, while the script is written to a decent standard by Dorothy and Campbell Christie and Geoffrey Kerr as they make the film good to follow.

The technical aspects that stand out best are the set, camera and costume, because the set is very decent to look at; the camera makes very good use of the locations the movie uses; the costume is excellent designed from start to finish.

Overall, this is not an outstanding British melodrama, but it works well due to the good performances, direction and script, along with the tense atmosphere, which gets the edge-of-the-seat status.