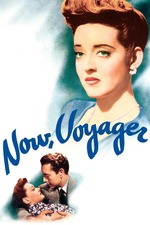 The film is also considered to be one of the finest performances that Bette Davis gave during her career – she said in an interview that this was one of her favourite movies that she worked on, which is very good to hear, considering that she very nearly didn’t play the part of Charlotte.

Davis campaigned heavily to get the part of Charlotte Vale, though Irene Dunne (who was contracted to Columbia at the time) was considered the first choice for the role instead. But Davis insisted that no-one else could play the role of Charlotte as well as she could – and to be perfectly and brutally honest – she probably was correct.

But this wasn’t the only problems the film had during pre-production. Davis to begin with disagreed with co-star Paul Henreid, because he was Austrian and not American, but when filming was done, Davis said that Paul was marvellous – and she got that right too.

The story of Now, Voyager concerns Charlotte Vale (Davis), a spinster who struggles to break free from her overbearing mother (Gladys Cooper), which leaves her in an awful state. But after a spell in a hospital where she manages to get the attention of her doctor Jasquith (Claude Rains), Charlotte comes out and decides that she wants to go on a cruise.

Aboard the ship, she meets Jerry (Paul Henreid) and she ends up falling in love with him, despite him already being married. They manage to enjoy a short date in Rio before returning to the United States, where Charlotte finds it hard to get Jerry out of her mind and find happiness elsewhere.

I have to strongly agree that Bette Davis gives one of the best performances of her career playing the role of Charlotte Vale, acting like she will do everything she possibly can to get away from her mother, who makes her life a misery. She suits the role very well and acts like she was born to play the part.

Elsewhere, there is a very solid supporting performance to be had from Gladys Cooper in her role as Mrs Henry Vale, the very bossy mother of Charlotte and she steals every scene that she shares with Charlotte. She acts like she is the boss and it also makes the viewer who know exactly who is in charge.

Paul Henreid gives one of the best performances of his career playing the role of Jerry, the man who Charlotte falls in love with, while both he and Charlotte are involved in one of the film’s most famous scenes. It became a classic moment in the history of cinema and almost everybody attempted to copy it.

Claude Rains (who Davis considered was her favourite person to work with and she also considered Rains to be one of the greatest actors) is very good in his role as the doctor who gives Charlotte the all-clear to go on the cruise that she wants to go on.

The direction from Irving Rapper is excellent because he allows the facial expressions to be seen to a very strong effect throughout, particularly with every scene that involves Charlotte and her mother, while the script is written to a very decent standard by Casey Robinson as he makes the film easy to follow.

The technical elements of the film are impressive, with the set, cinematography and music standing out best, as the set is decent to look at; the camera makes very good use of the locations the movie uses and also captures the dramatic moments well, getting the edge-of-the-seat status; the music is very enjoyable to listen to throughout.

The music managed to win the Academy Award for Best Music, Scoring of a Dramatic or Comedy Picture and it deserved the award, while the film also deservedly won nominations for Best Actress (Bette Davis) and Best Supporting Actress (Gladys Cooper).

If you are wondering where the title comes from, I can tell you – it’s from the poem “The Untold Want” which features the line “Now voyager sail thou forth to seek and find.”

Also, the film does feature one of the all-time classic quotes said by Charlotte: “Oh Jerry, don’t let’s ask for the moon. We have the stars”. This has gone down as one of the most memorable quotes in movie history and it is very easy to understand why.

Overall, Now, Voyager is not only one film you will need tissues for, but it is also one of the best films to have been released in 1942. It works so well due to the very good performances from the cast, as well as the excellent direction, the well written script and the very enjoyable music.