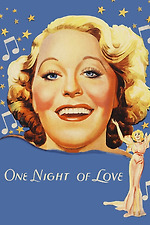 One Night of Love

Victor Schertzinger's Oscar-winning romantic musical in which a hopeful opera singer (Grace Moore) and her mentor (Tuillo Carminati) battle a lot that they hardly comprehend they’re in love.

Adapted from the story Don't Fall in Love, by Charles Beahan and Dorothy Speare, the story concerns Mary Barrett (Grace Moore), an ambitious opera singer who is taken under the wings of a well-known operatic genius, Guilio Monterverdi (Tuillo Carminati).

After devoting boundless working hours together and bickering, their relationship progresses into romance. But suspicion and misinterpretations stop Mary and Guilio from recognising their actual feelings.

Grace Moore gives an excellent performance in her role as Mary Barrett, the opera singer who doesn’t realise that she is actually in love with her mentor. She suits her role really well and for each tune she performs, she gets a very nice and well-deserved round of applause when she finishes.

Elsewhere, Tuillo Carminati is decent as Guilio Monterverdi, the mentor who continuously argues with Mary, while Lyle Talbot as Bill Houston, Mona Barrie as Lally and Jessie Ralph as Angelina are all respectable in their respective roles.

The direction from Schertzinger is very good because he allows the facial expressions to be seen to a strong effect throughout, while also keeping a pleasant atmosphere happening as well and the script is written to a decent standard by James Gow, S.K. Lauren and Edmund H. North as he makes the movie easy to follow.

The camera, music, costume and sound stand out best in terms of the technical aspects, because the camera makes good use of the locations and also captures the funny moments well, which get the edge-of-the-seat status; the music is enjoyable to listen to; the costumes are excellently designed; the sound is excellent as you have to listen carefully.

The only criticism I have is that the pace is a little slow at times.

Overall, despite the pacing, One Night of Love is a very enjoyable romantic musical, due to the excellent performance in particular from Grace Moore, along with the direction, script, pleasant atmosphere, technical aspects and some humour.