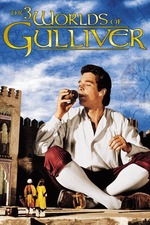 The 3 Worlds of Gulliver

Jack Sher’s skilful and charming adaptation of Jonathan Swift’s classic satire Gulliver’s Travels, concentrating on his adventures with the little people and the giants.

Doctor Lemuel Gulliver (Kerwin Mathews) wants to find out the world before his marriage to Elizabeth (June Thorburn), despite her wishes to the conflicting. He sets off on a boat, but is back with Elizabeth when he discovers she is aboard – being hid away.

Their reunion is short though, however. Bad weather leads Gulliver to a bizarre land occupied by tiny people called Lilliputians. His adventure then takes him to an enemy land called Blefuscu, and eventually to a land of colossuses named Brobdingnag.

Kerwin Matthews gives a good performance in his role as Gulliver, the surgeon who wants to explore what Earth is like before he ties the knot. But he is about to get more than he bargained for. Matthews suits his role well.

Elsewhere, June Thorburn is decent in her part as Elizabeth, the woman engaged to Lemuel and is against her fiancée finding out what the world is like.

Basil Sydney and Sherry Alberoni both give respectable supporting performances in their respective roles as Lilliput’s Emperor and Glumdalclitch, while Mary Ellis and Charles Lloyd-Pack are moderate as the Queen and the Prime Minister Makovan.

The direction from Sher is good because he allows the facial expressions to be seen to a strong effect throughout, while also keeping a tense atmosphere happening as well, especially with any scenes involving giants. The script is written to a decent standard the director and Arthur Ross as they make the movie easy to follow.

The technical aspects that stand out best in glorious technicolour are the set, camera and visual effects, because the set is decent to view; the camera makes very good use of the locations, particularly with any sunny weather and also captures the tense moments well, which get the edge-of-the-seat status; the visual effects are brilliantly done by Ray Harryhausen.

Overall, this is not an outstanding adaptation of the novel by Jonathan Swift, but it’s certainly enjoyable to view from beginning to end.