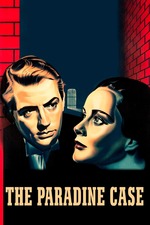 After the delirious high of the previous year's Notorious, the Master came crashing down to earth with his next film, and last made with producer David O. Selznick, The Paradine Case.

The film is a dry, dull, and lifeless courtroom drama/whodunit/romance; worth a watch only for the typically assured technical brilliance Hitchcock brings to the film. His camerawork and expressive use of lighting and shadows here are wonderful, fitting a story of obsession and betrayal quite well. Too bad the script is muddled, the pacing is sluggish, and most of the actors seem miscast.

Gregory Peck did quite good work in Spellbound in an atypical role for him. This time he gets a part that should've been right up his ally but he just never seems to fully inhabit the character here. His blind obsession for Alida Valli's femme fatale character feels inorganic and forced and his relationship with his wife is equally mismatched. Ann Todd is decent enough, and has the film's big acting moment, but she has no chemistry with Peck at all. Neither does Valli, who gets the sensuous smouldering part of her role down but seems to confuse wooden indifference with complexity. Charles Laughton and Louis Jordan fare much better in supporting parts.

Without the requisite passion for a dangerous romance and without the intrigue of a satisfying whodonit, the last third of the film that focuses on the courtroom drama is just a slog, enlivened only by Hitchcock's visual compositions.

Apparently the film had, like with most collaborations between Hitchcock and Selznick, behind-the-scenes troubles with the script, casting, and re-shoots. While some of that may have contributed to the lackluster work on screen, it was clear that the partnership between the two men was not producing the results either desired. With two such strong personalities, compromise was never easy and with Hitchcock's contract fulfilled, he decided to branch out on his own and produce work with full creative control. It would yield mixed results both artistically and financially.