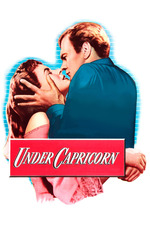 Easily the least of Hitchcock's three collaborations with Ingrid Bergman, Under Capricorn is a dry, lifeless period piece enlivened only by the Master's technique and the cinematography of the great Jack Cardiff.

Strangely returning to costume melodrama after having little success in the past, this film is all the evidence needed to prove that Hitchcock was no Max Ophuls. The film consists of scene after scene of long, dramatically inert dialogues that carry no emotional weight whatsoever. It is a film of talking instead of action, and that might have worked if we were invested in these characters or the narrative, but we aren't. It doesn't help that the film unflatteringly references previous, far superior Hitchock works like Rebecca and Notorious with its faintly gothic air, a scheming maid, the slow poisoning of our heroine, and Bergman in a drunken haze.

While Hitchcock's desire to again film in 10-minute long uninterrupted takes, as he did in the previous year's Rope, is one of the film's sole pleasures, I can't help but feel that it is also why I felt so removed from the story. Hitch's camera almost never stops moving; pushing in, pulling back, traveling up and down staircases, and in and out of rooms, it's impressive technically but also distracting. Unlike in Rope, the artifice is obvious and distancing; you're paying more attention to the camerawork than the actors or the story here. The only time that I felt the technique worked in concert with the film was in Bergman's bravura, show-stopping monologue. It's the one instance where Hitchcock draws out the emotion and drama by letting Bergman do her thing and give a powerful, completely unexpurgated performance.

Both Bergman and Joseph Cotton look as bored with the material as I was; Bergman at least gets one great scene, but Cotton has to play a stiff of a character that makes little use of his talents. It's a shame that these two actors, who gave two of the greatest performances in all of Hitchcock's work, are wasted here. Also, seemingly wasted is Cardiff's work behind the camera as the version of the film I saw on TCM recently looked painfully washed out and dull. There's no doubt that Cardiff's Technicolor mastery has been destroyed by time and lack of care. This is a film that desperately needs a restoration as its visual splendor is one of its only redeeming values. Even lesser Hitchcock deserves to be preserved for historical value at the very least.