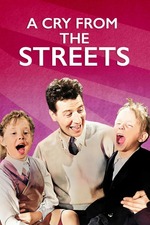 A Cry from the Streets

Bittersweet and touching look at the life of a young welfare worker played by Barbara Murray who cares for homeless and deprived young children in London and finds love with a cheery electrician played by Max Bygraves who works at the children's home. Of course it's very dated now, and shoehorning gags and songs for the Bygraves character doesn't help matters, but it nevertheless remains an interesting document of its time.

The film largely concerns itself with three storylines; a trio of young siblings headed up by the self sufficient Barbie who become orphans when their father murders their mother during a drunken fight, Georgie, a young harmonica playing boy who believes his mother is a successful cabaret artiste touring the world rather than a drunk living just a few miles away, and an older boy, teenager Don, who is reunited and reconciled with his mother as he becomes a man in his own right.

Director Lewis Gilbert draws out some wonderfully cute performances from the juvenile cast, especially from the Australian child stars Colin Petersen (later to play drums for The Bee Gees) as Georgie and Dana Wilson as Barbie as well as securing an efficient performance from entertainer Bygraves. The melancholic harmonica score is, of course, provided by Larry Adler.