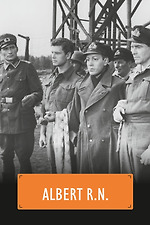 Break to Freedom nothing, this is Albert RN - I don't care what they called it in the US!

Based on a true story, Lewis Gilbert's film came out in the early 50s; a boom time for WWII memoirs hitting the big screen. As such it is just one of a rash of war and POW films from that era and unfortunately does little to set itself apart, being a rather solid and unimaginative affair.

The title, the proper title that is, refers to a dummy naval POWs made to be used as cover for head counts whilst their number surreptitiously made their escape. Jack Warner delivers his trademark paternal and affable wise owl character, complete with pipe, but the majority of the characters - much like the plot itself - never really rise above the stereotype. It's not really the film's fault, it's just that it follows all the expected tropes we've seen several times over in films such as The Colditz Story and The Great Escape; films which have stood the test of time better.

The plot is also hampered by a rather unconvincing subplot featuring Anthony Steel's character who, despite devising Albert and the escape plan, doesn't want to make his bid fro freedom because he's got cold feet about meeting a penpal he has fallen in love with whilst interred.

Still, it's not without charm.