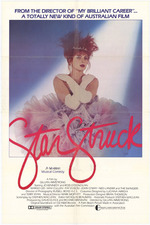 Scrappy, colorful, feel-good regional camp. Something about it fundamentally worked, even when it didn’t quite, because the lead actress was just wry enough, and the song-contest-to-save-the-bar scenario had just enough heart without being, you know, sentimental.

Whatever they were trying with the music came out of the oven as Uncanny Blondie which is basically a compliment.