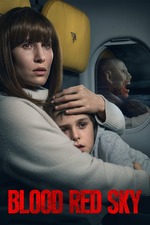 As high concepts go, "vampires on a plane" sounds like something Syfy would've commissioned in the heyday of SHARKNADO, but this German/Czech Republic Netflix acquisition--shot almost four years ago--is splattery and bonkers enough to be some pretty fun check-your-brain-at-the-door Friday night entertainment. Suffering from what's assumed to be late-stage leukemia and with a wig covering her bald head, single mom Peri Baumeister boards a flight from Frankfurt to NYC for an experimental bone marrow treatment with her young son (Carl Koch) in tow. But shortly after takeoff, the plane is commandeered by a team of international terrorists led by Dominic Purcell, with plans to parachute out and blow up the plane as autopilot takes it down close to the heart of London. Of course, Purcell's crack unit has one loose-cannon psycho (Alexander Scheer) who shoots Baumeister when Koch runs down the aisle and she tries to retrieve him. After the passengers are moved to another section of the plane, Baumeister makes her way down to the cargo hold, and without her medication to hold off the symptoms, she undergoes a change into a hideous, shrieking vampire and starts going after Purcell's team one by one.

That's really only the half of it, because shit gets pretty crazy the longer this goes on (and at 121 minutes, it might be a tad too long, and some flashbacks detailing the origin of her disease do kinda stall the momentum). BLOOD RED SKY knows it's goofy and just rolls with it as a vampiric virus runs rampant thanks to some mind-boggling stupidity on the part of Scheer's character, turning the plane into an airborne combination of the Titty Twister in FROM DUSK TILL DAWN and the Metropol in DEMONS. It's about a 60/40 mix of German and English, probably the only thing that kept this out of American multiplexes, because if you slap a Constantin Film logo on this, Sony/Screen Gems would have a January or April hit on their hands in normal moviegoing times. And Baumeister totally commits to this on a physical level in a ferocious performance that's quite impressive at times.