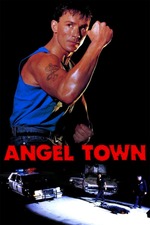 This is an underrated b-movie Classic. From the opening sex scene in a graveyard, the most tedious car chase scenes throughout the film where they weirdly just keep doing u turns, and the outrageously stereotyped portrayal of Latino as mindless gangbangers who live in derelict buses.

So many questions; why does the gangleader carry a tiny gun but no one else has a gun till later, why would such a badass gang devote their entire life to bully one dork - don’t they have real crimes to commit?

Warning though, the scenes with the Vietnam veteran are harrowing in the sense that he is clearly trying to steal the scenes and turns up the overacting dial to 11. The shootout scene he is involved with is also bizarre. Not much of this movie makes sense but that’s what’s so fun about it.