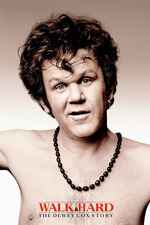 Eddie Vedder: "If Elvis and Buddy Holly are the Cain and Abel of Rock & Roll, Bruce Springsteen is Zachariah, Iggy Pop is Methuselah, and, of course, Neil Young is the wise prophet Ezekiel, then what does that make Dewey Cox?"

When all is said and done, Walk Hard will go down as one of John C. Reilly's most underrated performances. As one of the most versatile actors in Hollywood it has become criminally easy for his more serious films to fall through the cracks. Instead of the viewing audience appreciating his smaller, independent films like Cyrus or his more prominent feature roles in Chicago, Gangs of New York, or The Aviator among others, they would prefer to watch his stupidity on repeat in Step Brothers and Talladega Nights: The Ballad of Ricky Bobby. How has this happened, and what does it say about the viewing audience of today? Nothing good. However, Walk Hard had the formula to be a sure fire hit. It masterfully struck the perfect balance between comedy, music, and intrigue. It had legitimate, heart warming moments and belly laughs a plenty. Why has Walk Hard fallen through the cracks for years? I'm completely befuddled, confused, and honestly frustrated. It's a role John C. Reilly was meant to play. He helped write the original music, sang every song on the album, and even played the entire guitar track. This is his shining moment, a film he can truly be proud of from top to bottom, and not nearly enough people have appreciated it.

Was it because it came out shortly after Across the Universe, August Rush, Hairspray, and Sweeney Todd: The Demon Barber of Fleet Street? Maybe. Could it have been the late December, Awards season heavy release that brought it to its demise? It's possible.

So what am I trying to say? John C. Reilly is a great actor. Here, he is at his best. Since word of mouth failed to get this film success in 2007, I hope my word can get it at least a few more views now. Watch this film, you will not regret it.

The Secret Life of Walter Mitty