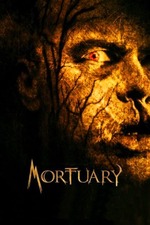 Mortuary is not a good movie. It is filled with clichéd horror moments, paper cut-out characters and utterly abysmal CGI effects.

It opens with a decent enough premise - a mother with her two children moves into a home that also serves as a mortuary, built near a cemetery in a small quiet town. Although the mother is supposed to be a novice mortician, her efforts amount to almost slapstick comedy, where any previously built tension is instantly dead & buried.

From there, the film bounces between trying to be a serious scary horror, then to a horror comedy, but ultimately it fails on both fronts. Mortuary starts off reasonably strong (and has some decent makeup effects and good sets), but as a whole, it is a mess with little logic or reason.

There is some fun to be had with Mortuary, but temper your expectations. It's sad Tobe Hooper had his name on this.