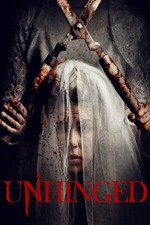 This wasn't terrible by any means and despite it not having any particular glaring problems - it is just dull. The initial set-up, while hardly original, is decent enough. The protagonists are your typical cliched victims & villains.

They try to go for a slow burn story, but because the overall plot is just not that interesting, it all turns into a boring affair, mixed with occasional flashes of violence - which, even as a big slasher fan - were tedious.

I take issue with the ending, because once everything is said & done, it is a bad attempt at trying to inject black humour into a film that did not feature a single moment of levity throughout its runtime.