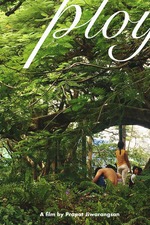 An unintended but illuminating double entendre prefigures the sociological strata that Prapat Jiwarangsan interrogates in his docu-film: its title, Ploy, contains significations both literal (the name of its ‘main’ character, a Thai sex worker) and symbolic (in its semantic definition: a “cunning plan, designed to turn a situation to one’s own advantage”). Naturally, the former mostly evades our attention altogether — given that the name ‘Ploy’ has little cultural import, but also because we, the film’s intended audience, come from a background worlds away from hers.

Ploy chronicles, through excerpted anecdotes and landscapes conjured via negative images, the frightening contrasts between Singapore’s social classes, often hidden beneath a veneer of idyllic urbanism. Specifically, it mourns the immigrant subaltern: of workers both legal and illegal (by the terms of the garden-city’s law), working as domestic helpers or offering sexual services to other foreign labourers. Traversing between cosmopolitan Singapore and her neighbouring countries’ rural backwaters, Jiwarangsan offers a generalised rumination on the shared experiences of most migrant workers as they make their way to an ostensibly brighter future for themselves and their children.

The images of Ploy, generally lo-fi and formally deficient, nonetheless locate in themselves a kind of thematic formalism articulated by the likes of James Benning. Jiwarangsan shoots letters of reports detailing domestic worker abuse and the responses by different stakeholders, along with voiceovers from various migrant workers, each professing quiet if uncertain optimism for their children’s social prospects. Aside from these, and the beguiling shots of nature that punctuate its mostly urban surroundings, the film also recalls, in its negatives of picnic dwellers at places such as Little India and Orchard Road, the compositional violence of Tulapop Saenjaroen’s short film People On Sunday. Whereas Saenjaroen examines, vis-à-vis its silent German precursor, the commodifying lens of leisure and relaxation within a capitalist prism, Ploy digs into a layer further: under the working- and middle-classes of first-world Singaporean citizens stand their slaves, units of labour for the weekdays and non-entities, at best, during the weekends. Or else they are irritants and social pests, necessitating the order of the state, through literal policing and threats of repatriation.

Maybe this might be too generous a reading for a relatively slight work whose impact is generally sporadic. But as a citizen of Singapore, I am witness to many of these scenarios, whether in the news or on the streets where an unconscious prejudice afflicts even the most kind-hearted self-proclaimed progressive. Ploy, true to its title, inverts the luxurious greenery of our liberal society and underlines, through narratives of jungle prostitution and the ominous tracing of a red marker over Jiwarangsan’s negative images of light, her true colours of conservatism.