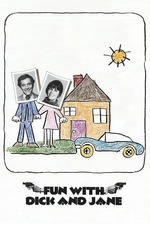 Fun with Dick and Jane

For all its satirical spirit, this film doesn't quite take upper middle-class America to task as brutally as I'd like - there's almost a sense that the filmmakers know their main audience are beneficiaries of the status quo and are therefore reluctant to alienate or insult the viewers *too* much. There are lots of moments that kinda reinforce those values (the way it treats racial minorities and queer people feels off in that weird almost-self-aware way where the writers partially wanna make the privileged characters the butt of the joke but undermine that by peddling in tired stereotypes that shift the jokes to be at the expense of the marginalized instead). Furthermore, the filmmakers' decision to put the more cutting humor on the sidelines in favor of emphasizing broad comedy defangs the social commentary quite a bit, which adds to my theory that the writers weren't quite ready to go all the way with the satire. Which is a bit of a shame, I think, because the bones of a brilliant, biting black comedy are there. Still, the film on its own merits is undeniably witty and sharp when it has the sense to steer clear of its worst instincts. And when the satire does come to the forefront, it works pretty well (the televangelist sequence is inspired). Jane Fonda is delightful. You could do a fair bit better with your time, but you could also do a whole lot worse.