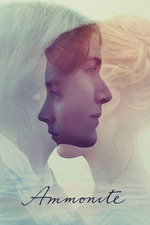 Ammonite is a type of coiled fossil, small in the centre and spiralling outward. These remains of extinct marine life symbolize the beginning of something; in the case of Francis Lee's film, it represents the romance between its leads. The film brings to screen the story of Mary Anning, an English paleontologist who became known for her findings of Jurassic marine fossils. Mary's work is important, but the film's heart lies in the relationship she develops with another woman. Excavation takes time and care to find something beautiful within, and that's reflected in Ammonite's delicate love story.

Mary (Kate Winslet) is a brazen, independent woman living in the town of Lyme, West Dorset. A no-nonsense type, Winslet plays Mary as stone-faced as the rocks she excavates. Her story is introduced with a chill in the air. The coldness of the film's setting by a frigid sea is complemented by Stéphane Fontaine's muted cinematography. Soon, a man named Roderick (James McArdle) arrives. He's a fan of Mary's work and asks if he would be able to observe her process. He brings his wife Charlotte (Saoirse Ronan) along. She's reserved and melancholy – recovering emotionally from the loss of a child. Her unsympathetic husband believes she's not fit to travel abroad, so he leaves her behind with an unenthusiastic, equally reserved Mary. Striking up a friendship, he believes, would do her good, but it develops into something much more.

There's animosity between the pair as being women of two different worlds, they seem to have nothing in common. But when Charlotte falls ill to fever, Mary must care for her. Slowly, the way Mary looks at Charlotte becomes more attentive. Being in her presence unlocks something within her that she hasn't felt in a long time. Charlotte begins to take an interest in Mary's work, and, as they make discoveries together, they carve out a love story in the process. Mary brings out the many qualities that Charlotte's husband misses in his wife. She's bright, funny, and clever, and a smile appears on Mary's face.

Ammonite is slow-burn romance, and you can feel the heat through the screen. The coldness is replaced by a sun's warm kiss. Both are aglow with happiness, but, as with most LGBT period dramas, the ending turns lukewarm as reality sets in.

Ronan and Winslet's chemistry is electric. Through both of their magnificent performances, you can feel everything they're feeling internally for the other, so much so that they don't need to express it in words. The film explores the complexities of being a woman in these times and the equally complex relationship between women who are from different walks of life.

Accompanied by Volker Bertelmann and Dustin O'Halloran's beautiful, soft score, Ammonite is a delicate and tranquil film, with a Carol-esque ending that yearns for possibility.