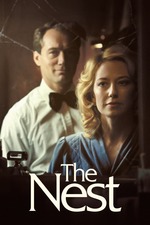 Sean Durkin’s sophomore feature, as both writer and director, opens with the shot of a home almost fully concealed by shrubbery, but you can see the two cars in the driveway. It cuts to Rory (Jude Law) speaking excitedly on the phone. The camera then pans away from him – outside, a window working as a barrier to what is being discussed. The audience is always made up of outsiders looking in, but this fact is accentuated. The Nest, at first, presents a beautiful, fully-realized image of a family: a father who bonds with his children; a mother who loves them unconditionally; a daughter who does gymnastics; a son who’s just coming of age. Presented with a calming score of faint piano keys and stylish production design, this seems to be a home that represents the American dream. But it’s a dishonest picture, as this nest was never built to withstand even the slightest breeze.

Although it isn’t stated plainly in the film, this family drama is set in 1986 to “explore the link between America and the UK,” as the press notes state. This was a time of an emerging global market that saw London at the height of deregulation. Risk and ambition were valued, but at what point does ambition take precedence over family? Opportunities are plentiful and Rory wants to seize all of them. Things are “drying up” for him, he says, and he convinces his family to move from Manhattan to England for the prospect of a new job opportunity in London. A chance to make real money and have a fresh start, but this isn’t the first time he’s made these promises. His wife, Allison (Carrie Coon), isn’t keen on this move – “Go fuck yourself!” – but Rory silences all concern around him and tries to smooth things over by getting her a horse and promising her a stable. When they arrive at their grand country estate in Surrey, with a mansion of classic ghost story appeal, it seems that maybe this is it – perhaps the better dream isn’t the American one. But sitting around an Elizabethan table fit for a queen’s court, it’s clear this family is out of place. They don’t belong in a home that was once luxurious and whose residents lavished in their wealth. “It’s perfect,” Rory says. However, he’s living with delusions of grandeur and his greed gets the best of him. All his dreams crumble quickly, bringing his family over the edge, and he must realize that family is the most important thing before it’s too late.

What Rory does for work is vague and the most uninteresting part of the film. What’s the company? What kind of deals is he so desperate to make? It may be a trading company, but it’s an impression with no certainty. During a business meeting with his bosses, Rory discusses how he wants to “[move] with the times,” but that’s hypocritical because this big move that was supposed to be all about bettering themselves sets them back as the two who have built this nest slip into traditional gender roles. Rory rules the roost and Allison’s identity becomes that of a wife. The best scene that illustrates this changing dynamic is the film’s sex scene. It’s not very often you learn the most about a couple during scenes like these, which can be unnecessary or insignificant to everything else in the narrative. But this one reveals the very archaic cracks in their relationship: Allison asks Rory for his permission to orgasm. Her complete loss of control is represented most affectingly in the form of a horse Rory buys her. She struggles to control it as it balks and whines. Eventually, the weight on its shoulders becomes too much to bear. She tells herself and her children that this situation isn’t hard, but eventually, collapsing, breaking down, life is suddenly shot.

Law and Coon play so well off each other as the tension between them builds as their marriage begins to fall apart. Allison’s old self is revealed slowly as she calls out his B.S., standing up to him in delicious ways. It’s an emotional and hefty role for both leads. Law is charming and charismatic as this unlikeable, selfish character hell-bent on achieving the appearance of wealth. His character isn’t explored as fully as one would hope when aspects of his life like a bad childhood and a strained relationship with his mother are hinted at but don’t go anywhere. Coon is dazzling, like a glamorous ‘30s star in mink with a cigarette always in hand. She commands the screen as a mother doing everything she can to keep herself together for her children. Some of the best scenes are hers: The camera slowly moving in towards her face in a moment that’s gut-punching for her; and another where she lets go through dance. Speaking of, Charlie Shotwell as their son Benjamin, and Oona Roche as their daughter Samantha, don’t get as much to do, but they’re adequately explored. These young actors display the excitement over what a new life is supposed to promise while also playing the anxieties, upset, and rebellion that slowly bubbles up, especially in a situation where a child witnesses the love between their parents slowly evaporating.

The Nest is one of the best family dramas of the year. Durkin pens and directs an enthralling picture of greed, family, gender roles, and the illusion of the American dream.

Review for Next Best Picture