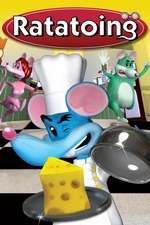 This is one of the most beautiful pieces of filmmaking I've seen in my entire life with the most emotional story I have ever seen. It is so emotional that I started ballistically crying in the first 17 seconds and my pet monkey had to punch me repeatedly until blood started pouring out of my nostrils and drowning him. After I dealt with that I got to enjoy the film. That really goes to show how emotional this movie is. And not all of the emotion is on the surface level. The film has lots of symbolism which brings me to my next paragraph.

The symbolism in Ratatoing was truly beautiful, Especially the part where the cheese represented the Communist manifesto and the various escapades of Karl Marx, it's creator. So much symbolism in one block of cheese. It reminded me of when I was in third gradeand I brutally murdered someone because they said that Minecraft was better than fortnite. Fortnite is godlyand this film frequently references the amazing game known as fortnite making it an even better film all around.

Once you realize what all the symbolism means you can truly see the bigger picture. Here is an explanation of the symbolism for the plebeians that didn't originally get it:

The symbolism tells the story of Adolf Hitler in the battle he participated in in fortnite back the year 2000. The reason fortnite exists in 2000 in the symbolism is because of the time travel in the actual story featuring The rats cooking things. All together it becomes a criticism of what Fame can do to a person and how they can only become pure after thousands of rounds of epic fortnite battles and also my monkey really liked the movie if you were wondering.

The next reason why Ratatoing is amazing is the animation is truly beautiful and rivals that of studio Ghibli. You can tell hours of effort were put into every single frame of this amazing animation. My monkey died of pure amazement when he saw the animation. I then resurrected him using my epic gamer powers with the assistance of Herobrine but that led to him becoming a zombie so we had to kill him then we did a bunch of spells on his Dead zombie body then resurrected him again and he was fine and he really liked the movie.

Finally, we have to discuss the controversial torture suicide scene. I personally feel that it was an attempt to indoctrinate our children into the cult of Scientology. Good thing I absolutely love Scientology and my monkey does too! this scene was absolutely perfect no matter how controversial and I think the creators were quite daring for including it.