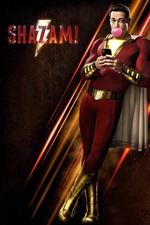 Very fun and unique enough to stick out of the crowd

As I've said prior, the start is clunky. The opening scene doesn't really grasp your attention and Billy Batson doesn't come off as that likable or well-acted in the first act. The introduction to the villain is fine, although maybe a little lackluster. There are also some semi-jarring tonal shifts, like when the car crashes and the Christmas music is being used.

It does succeed in its comedy though, and Jack Dylan Grazer is so funny and likable from the start. And then Zachary Levi as Shazam! gets introduced, who kind of carries this film. It contains some good writing. I mentioned the comedy but there are also some good thematics about standing up for yourself, using your powers for the greater good, the seven deadly sins, teamwork, and letting your closest people down. I also really like the horror direction the film takes. It makes it a lot more unique and interesting.

I guess I have some more minor complaints. First off, it's kind of bland looking. Nothing about the direction, cinematography, or visuals effects were that appealing. Although, the monster design is kind of cool and fits the story well. But, other than that, meh. Even the set-design does nothing to really enhance the experience, even visually. However, none of these ruin the film in any fashion whatsoever. There also some wonky CGI here and there.

Despite this, it's pretty fun! I think it's pretty similar to Sam Raimi's Spider-Man from 2002 both in terms of feel and tonality but also in how much it succeeds as a film. I don't necessarily see myself watching this a third time.