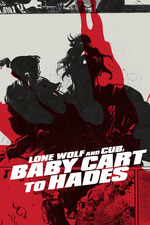 A true samurai is hard to find these days

A wholesome river journey turns bloody in maybe what is the most grim and gruesome Lone Wolf and Cub movie yet. I love this one. I remember watching this when I got the DVD out of curiosity and I knew I had to see the other ones. So I knew when I rewatched it, I’d love it just as much, if not more…

And I was proven correct!

The opening is just so sick with the bamboo forest ambush directly followed by the rockin intro, mixed with some idyllic scenery and our heroes Itto and Daigoro traveling to their next massacre.

But this movie becomes more than that, as Itto proves his fatherhood and devotion to his son more than ever before! This movie shows a light side to Itto, and shows the rational man in him, instead of usuals primitive and aggressive mindset. He shows that when he kills, he does so with a clear mind and a clear conscience. And when he saves, he only saves those that he seems worthy. He is not a selfish killer, he’s just a man on a path of vengeance who happens to have a death wish. Yet, he’s UNSTOPPABLE!

And when he does kill, those kills are legendary. This has some of the best fighting choreography I’ve seen yet. The Yakuza is an iconic enemy fulfilled to their fullest potential and the ever persistent Yagyu clan comes in force with ever more deadly enemies and frighteningly hair-raising duels. Itto proves his mettle. That last massive battle of 50 against 1 at the end has to be my favorite of all the fight scenes in the whole series. Just so ruthless and well executed, literally executed by any weapon available to him. Spears, swords, grenades, and even a MACHINE GUN?!?! All of this is executed with precision and creative camera work and strong direction. This also has one of the best most multilayered stories in this series. This sequel really gives the series its needed steam to keep going on the right bloody direction.

The direction towards the Demon Way to Hell!!!