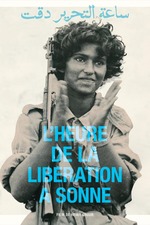 this is showing as the first instalment of The Between Women Filmmakers' Caravan 'A Woman & Her Film' series, which seems excellent & something to keep looking out for throughout the year.

No one—at least here in Britain—seems to know about the Dhofar Rebellion, the revolution against British rule in Oman that, though ultimately defeated, managed to liberate up to a third of the country from effective British control. 'The Hour of Liberation Has Arrived' documents life in this liberated zone—efforts at education, medical care, land redistribution, the ending of tribal and colonial hierarchies and, centrally to the film, women's liberation. The direction seems to be somehow turned completely over to the revolutionaries it is documenting: they narrate and sing over the images, which are both beautiful & mundane. At times you can only know there is a war going on because there's always a rifle within sight.

There is only one brief combat scene, a few revolutionaries setting off an artillery gun as the camera distantly looks on. Revolution, the film knows, cannot be limited to combat, because it is primarily the struggle of a whole society to seize its freedom. What seem to be a few scattered shepherds turn out to be the focal point of an attempt to liberate the whole Arabic Gulf region, a transnational network of solidarity and collaboration that is given life through the revolutionaries' very actions: my favourite scene was the geography class, where students would play the part of countries colonised and struggling back against colonisers around the region; it cuts seamlessly to documents of foreign delegations, demonstrations and other revolutions. Even the film's own production—post-production being completed by Yemeni workers in London—inscribe this sense of internationalism onto the possibility of us being able to see the film at all. There is more of this, hopefully this year I get to see a lot of the revolutionary cinema I've so far missed.