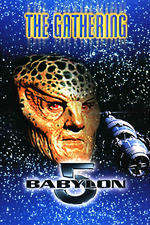 I'm not going to the theatre any time soon and I honestly don't think you should either unless you live in a country that's absolutely flattened the curve. I don't think any movie is worth risking your life. You'd think that lockdown and COVID would generally have increased my viewing habits, but that's not the case. I've found 2020 to be an incredibly difficult year (ie my mother died, I was laid off, school cancelled my program for the foreseeable future) and not even film or television or reading has soothed the pain. I am back to work, thank god, but it's still incredibly stressful. I've only read 70 books so far this year! Which is what I usually hit by June on a good year. I can't read, I can't watch, and I can't go to the theatre.

Some positives have reared their faces though. I picked up the complete series of Babylon 5 used at my local used music shop (where I buy 95% of all my movies and video games; I'm too cheap to buy things new). I had always wanted to see the show as I had heard it's one of the rare shows designed with a beginning, a middle, and an end. I never saw it on TV in syndication because as a younger person, I sneered at the look of it, the cheapness of it. Of course, decades of watching classic Doctor Who has since disabused me of any notion that low budget SF = bad quality (not surprisingly, there's an affinity between DW and B5 in terms of the sound design. you can always hear footsteps on both shows because they don't have the time or the budget for a proper mix).

Let this review stand for a review of the pilot and the first 8 episodes.

I didn't love the pilot as there's too much going on, too much exposition, too many concepts, but I shouldn't have judged too harshly as it lays out quite a bit of groundwork that's punctuated by bits from later episodes. The "hole in your mind" isn't satisfactorily explained during a later episode, but rather, hinted at, a sign or portent of things to come. I quite like the serialization of this show; it's unique among its peers, I think. In this era of television, there were three kinds of narrative: high serialization akin to soap opera; medium serialization (a balance between Monster of the Week and Mythology, cf. The X-Files), and low serialization (most TV shows, especially Star Trek). Deep Space Nine was medium serialization, making it unique among its Rodden-brethren. Babylon 5 opts for a medium-high serialization, it appears: a larger story is hinted at by the borders of each episode and single stories act as bricks in a larger construct. You can tell that J. Michael Straczynski understands deep in his bones how serialization works.

Coincidentally, earlier this summer, I read through his entire run on Amazing Spider-Man. It's famous (or infamous) for a few reasons: 1) it introduces Spidey's organic webshooters, 2) the Inheritors (specifically Morlun), 3) the idea that the spider chose Peter to be a totem of spiders in general, 4) the hilariously bad 9/11 issue, and 5) the One More Day fiasco. I started it because of John Romita Jr, probably my all-time favourite living artist of Western comic books, but I finished it because Straczynski impressed the hell out of me in terms of dialogue and serialization. Even the one-off issues, the breathers between story arcs, were fantastic character studies of Parker, mostly, and helped fill in the edges of the world Straczynski was creating.

That's the same sort of effort I'm finding with Babylon 5: even if the self-contained episode doesn't obviously advance the major plot, it's filling in the world with texture. This is an artistic concept I return to again and again in my criticism: anybody can write plot and anybody can direct, but not everybody can create a textural depth worth returning to. I don't necessarily mean the depth of the lore (say for example, Star Trek's wealth of future-history) but how textured that lore is.

For example, the most fascinating aspect of the show to me is its critique of colonialism. The Centauri once subjugated the Narn but now they are "equal" allies in this new peacetime. But the result of this colonialism, the Narn have become warlike and ruthless, symbolized by G'Kar's petty scheming. The Centauri themselves have become an old empire, one crumbling with decadence. Their power slips from their fingers. It is heavily implied the very act of colonizing is what caused their imperial decay. To colonize is to eventually fail. The depiction of the Centauri and the Narn are worlds ahead of Star Trek's general "one race = one personality" cf. the Klingons and the Romulans (again, DS9 undermines this dogma, thankfully, and critiques the Federation's complicity in colonization).

Each episode so far has given us a satisfactory self-contained plot which simultaneously fills out the fictional with much needed texture. I know more about this world with each episode and this knowledge drives me to invest further emotion and time. The more textured the world is, the more I care, and the more that can be done with that world. A one dimensional world can only provide so many variations on the same old story tropes. A textured world can zigzag where it wants provided it does the work in the first place.

Another compliment I can pay to this show is its sumptuous production design. While the cinematography and equipment used to capture the imagery are low budget, the costuming, set design, and lighting are all absolutely lovely. The costumes are just gorgeous to look at and they don't fall in the trap of generic future outfits. Characters have style and different outfits and these clothes are real and not just a quick change coverup. The station itself isn't just industrial corridors and captain's quarters but different spaces for different socioeconomic positions. A rented room looks different than G'Kar's personal quarters (though I suspect the physical space is the same set but dressed differently). Even the industrial corridors have different flavours. Where somebody meets the giant bug guy to buy contraband is a different space than those the Commander walks through on his way to another meeting. The market place bustles with different kinds of merchants. The set dressing and production design strain the budgetary limits and often go past them thanks to clever and beautiful design choices.

However, I can't say this show is perfect. The lead actor and the character he plays are bland as shit. I also don't think the show has enough characters. One thing Star Trek excels at it is a vast library of characters. Whenever Commander Sinclair orders a lower ranking person on Babylon 5, I wonder who that person is and why aren't they named. I wonder what their life is like and why we have to spend so much time with Commander Boring and no time with the rest of the crew. Even the head of security, Garibaldi, isn't given much beyond being horny and wily. Who are the people in the central command station? What kind of lives do they lead? In one episode, a newly introduced security officer is revealed to have a gambling problem and he steals a power source to pay off his debts. Too bad he's killed halfway through the episode. The show should have kept him around just for texture. It's a credit to the show that I wish I knew more about the people on the station, especially when the makeup and costuming is so good.

Even with some problems, Babylon 5 is keeping me entertained. I'm enjoying my time with the show. I might do another review of the second half of the first season using the same item (the pilot) but I make no promises.

Stay safe out there and don't risk your life for any movie, especially not one as doofy-looking as Tenet