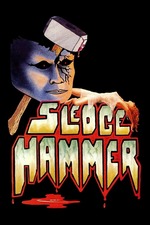 what i like about horror films is not their commitment to realism or even gestures towards realism. what i like is that each horror film is its own self-contained universe, each one looking like ours but isn't. the universe of Sledgehammer, like most horror films, is slightly askew, askance, its laws of physics and logic just not quite right. not necessarily dreamlike, though that is the easiest comparison. no, rather, a better explanation is an example. in Time Out of Joint by Philip K. Dick, a man reaches for the chain of a lightbulb in his bathroom but misses by inches. muscle memory from countless pulls of the chain tell him where it should be, but in reality, it's just slightly somewhere else. is the chain's new position the lie, or is his muscle memory the lie? or are they both true? in Sledgehammer, a simple cabin can have endless hallways all looking the same; a group of people can go back to drinking beers after they spoke to the dead; a killer can change forms and resist electrocution. their world is like our world (frat boys having fun, drinking beer, and making love) but it is surely not. and it's my pleasure to visit these alternate universes, if only to see how slightly changed they might be