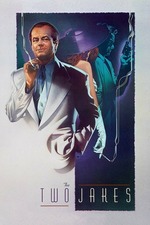 got the new bare bones blu ray from Paramount and it looks fine. the subtitles are perfect, which i know doesn't seem like a big deal, but it matters to me. i thought that i had forgotten everything about this movie beyond the premise, but i either figured out the major twist halfway or i remembered it. if you've read a single Raymond Chandler or Ross MacDonald (highly recommend both), you'll guess the major revelation around the same time i did (ie the same reason why i was able to figure out Kiss Kiss Bang Bang's switcheroo long before the characters did—it's lifted straight from a Chandler novel).

Nicholson's direction is fucking great. he has a great eye for composition. he might move the camera around a bit too much and use close-ups a bit too much, but he's got a natural feeling for where the camera should be placed. it makes me wonder if Chinatown could have existed outside of noted child rapist Polanski.

anyway, great movie. a superb companion to Chinatown and an extension of its themes.

Ghost in the Shell