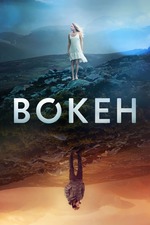 Bokeh is a film about an american couple of a grappling with the aftermath of an apocalypse that occurs while they are vacationing in Iceland. The film is decent but flawed in it's execution someways. Before going further with this review I'll say straight out the most important thing about this movie. This is a hipster movie if there ever was one. I'm reluctant to call it sci-fi either, it's more of a dark fantasy set in modern day. With that said onto more details.

Technically speaking the film has some high points. It is beautiful and takes advantage of the natural scenery of Iceland. At times I fealt like the film was made by a location scout. The tone is set very well in this regard. The music and sound editing is descent as well. I do think though this strength in a strange way is a kind of weakness as it does come off as pretentious. One of the biggest flaws in this film is that the film is paced far too slow in certain sections and feels dragging in the early parts. It seems in a way as if the editor didn't have very good material to work with. A final detriment is the dialogue in the non-plot centric points is tripe. Which is a good lead in to the thematic elements that did and did not work for me.

The film seems to have two main themes. The theme done well is the mysterious nature of the apocalypse which offers little explanation and reflects on the insignificance of the main characters ability to effectively handle the situation on a psychological level. The second theme which is more personal and not done as well is the effect of such an occurrence on the main character's relationship. This one would have been a strong point if not for one serious factor. The main character's are unintentionally annoying. The male, Riley, comes off as a hipster and fool and the female, Jenai, is the most uninteresting pretty girl in the world. One big positive about this is that both characters do develop through the film and by the end there is a real sense that Riley in particular has changed for the positive. Whether that matter's in the setting this film has set though is really debatable.

Overall, I have to say the film has some entertaining and good moments from a story perspective and if the film were more of these moments I would have enjoyed it more. However, for each moment of fun there's a lot of Indie garbage. Long scenes with muted sound and moments of pseudo-intellectualism seem to be the directors go to for this piece. I also found the ending a bit forced and it left me with a 'meh' feeling that I'm sure wasn't what should have been felt for the events that occur.

Giving Bokeh 2 1/2 'candid pictures of your boring girlfriend looking at stuff' in my book.

Primarily fans of Indie films but I'd also recommend this to people who liked films like 'Garden State' or '500 day's of Summer' and aren't aware that they are hipsters. I also think older viewers who are into character drama's may enjoy this. A definite no for fans of action, sci-fi, and horror, it will just piss you off.