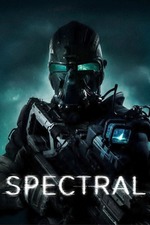 A fun and well constructed sci-fi action flick very reminiscent of James Cameron's Aliens... except with GHOSTS!!! This film is a great example of how a silly idea can be made into a very fun film. The acting is descent and the characters are likable. The Sci-fi, action tropes in this one may turn off some people but for me they were very much what I expected. What I didn't expect was such good sci-fi concepts in there and a good explanation for what the ghost's were.

On a technical level the effects, and lighting is great. Camera work was somewhat reminiscent of 'Black Hawk Down' and 'Aliens'. My real only complaint in a technical regard is more towards this genre of film. Slow motion... it's out dated and expected. For once I'd like to see a final last second save happen in real-time.

Thematically, the film has a very anti-war theme which is a bit confusing at times since the film is loaded with action. The deaths in the film carry some impact which is a saving grace. The ending though does leave you with a decent message.

Where this film is strongest is definitely in it's entertainment value. Good pacing, fun montages, well-done action, a good adversarial element, science mumbo-jumbo. The strongest element I feel would be the story development which is very reminiscent, again, of Aliens. The only that would have boosted this would have been some one-liners or some more fun dialogue, though arguably this could have undercut the theme of the film.

I give this a solid 4 "Ghostly Soldiers" rating

Would definitely recommend this as a entertaining pop-corn flick for most audiences. Fans of Sci-fi, War, and Action flicks would get a good time from this film.